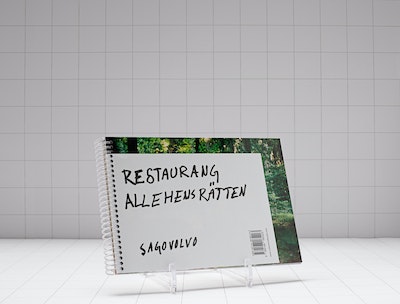 Köp på AdlibrisKöp på BokusKöp på BookOutlet
RESTAURANG ALLEHENSRÄTTEN by Sagovolvo (Bella Rune & Jonas Nobel) was a performance piece where the audience was brought on a hike through a forest area on Djurgården in Stockholm. During the walk small dishes of food was served, inspired by the things you can find and pick in nature. In all the laid out scenes the dishes that was served, the ingredients and the characters that served them was given different political meanings. For example, the blueberries of childhood was served at the same time as giant blueberries showed up in the forest, accompanied by a monotonous voice about labour rights playing from loudspeakers in the trees. Sagovolvo called the performance ”a training camp for the imagination” hoping that the audience would get a chance to reflect on habitual structures and preconceptions, and to together imagine new and different realities. The idea of the meal as the perhaps most important social gathering for political discourse, was of course also an important part of Sagovolvos interest in involving the act of eating in the piece. The texts that was found in the script was, for instance, a mix of their own texts and material from different blogs and the Wikipedia. Is it possible to create new realities before dreaming how this new reality should be designed and organized? This book uses the cookery book as metaphore for its setup. The market for cookery books in Sweden is growing at the same time as the hours the average swede is cooking at home decline. This means that the cookery book mostly function as food for dreams. The script of the performance combined with documentary photographs, by the artist Jenny Källman, creates an image of the piece. Interspersed amongst the photographs and the pages of the free sheet, that was handed out in one of the performance scenes, you find the recipies that made Restaurant Allehensrätten possible; instructions for action and change, from raw to finished product. Recipies are seldom rights managed, on the contrary, they function more in the sense of the open source-principle. They are easy to copy and a good recipe has alchemical qualities; it can transform a simple raw product to gold. A hard and indigestible potato becomes, if you follow the instructions, a soft, nutritious and enjoyable experience. A recipe is a description and a call for reorganizing reality for the better. In order to change the existing, one has to imagine and to dream something else. This something exists in the beginning, as a thought or a dream. Reactionary forces always called the progressive movements dreamers with a bad connection to reality. A multitude of institutions and concepts in todays society is a result of this kind of dreams. Women´s voting rights, paid vacation or the abolishment of slavery have all been seen as impossible reforms by some, but persistant dreamers, often risking their lives, have made these become a reality. Dreams and ideas that were seen as odd at the time of conception, has lead the way for cultural expressions and social conventions that are looked upon as natural today. Restaurang Allehensrätten was produced by Mossutställningar in cooperation with Parkteatern. Graphic design: Jonas Williamsson. Print: Printon. Released April 12th 2017 at Woodstockholm, Stockholm; Sweden.
Köp på AdlibrisKöp på BokusKöp på BookOutlet 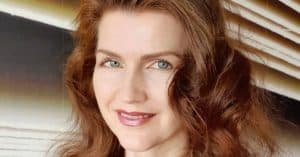